5 Women Innovators Who Changed The World

Children in their formative years are sponges ready and willing to soak up new information. To get the most from their willingness to learn, it becomes important to employ the right techniques. This can be achieved by employing hands-on learning methods that make learning fun, while also teaching your children to properly employ critical thinking and to be innovative, setting them up on the path to making and 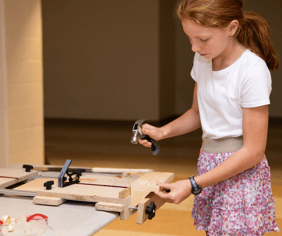 These women have become names that transcend time, their impact in the world is forever etched in history. They are famed for facilitating innovation with the application of critical reasoning and hands-on skills across their different fields, impacting the world and our lives forever.

Many people have greatly contributed to NASA’s space explorations and space travels, and one of them was Creola Katherine Johnson. Nowadays, we can input complex data in our supercomputers and have answers at the ready in seconds or minutes. But things were different in the 20th century, at this time, the use and development of computers were in its rudimentary stage. At this time, all these complex calculations fell to women like Katherine who were dubbed ‘Calculators’. Katherine and her peers were able to help NASA on their exciting flight missions as a result of their hands-on mathematics skills and their critical thinking ability.

Johnson’s work included but was not limited to calculating launch window trajectories, rendezvous paths for the command module and Apollo Lunar Module. Her works were also crucial in the emergency return paths of the Mercury Space Flights, including those for astronauts John Glenn (First American in orbit) and Alan Shepard (First American in space).

Being an innovator is more than just creating or inventing new things, it is about giving value with your creation and very few people have been able to do it as well as this woman-duo. These innovators started out as friends at Columbia University and shared an interest in solar lighting technology. Anna stork and Andrea Sreshta shared a vision of solving problems on a global scale, they aimed to make a basic resource easily available and their answer to this was the invention of LuminAID. This wonderful, life-changing innovation would not have been possible without the tinkering and hands-on learning experienced by this innovative duo.

LuminAID was designed to provide a light source after the Haiti earthquake in January 2010. This was with the understanding that basic supplies should not just include food, water, and shelter, but that light was also a necessity in a disaster zone.

Dame Zaha Mohammed Hadid was a British Iraqi designer, artist, and architect recognized as a major influencer in the world of architecture in the late 20th century and early 21st century. In 2004, Hadid became the first woman to receive the Pritzker Architecture Prize, she also received the Stirling Prize, which is UK’s most prestigious award in the years 2010 and 2011. For her services to architecture as a result of years of hands-on learning experience, she was made Dame by Elizabeth II and in February 2016, was individually awarded the Royal Gold Medal from the Royal Institute of British Architects, becoming the first woman to receive the award.

Every time you turn on your television to watch your favorite rock or pop star perform, you are always lost in the moment, jumping, singing along with the artist on a show that you forget to recognize and appreciate the stage, or set, on which they are performing. Visual arts appeal to all senses, singing and moving your body sends streams of goosebumps all over, listening to the sweet melody makes the show enjoyable but the lights on the stage set your mood right. And this interesting work of art is made possible by stage designers, one of which is the world’s renowned Es Devlin.

Devlin is seen by many as more than just an art designer, she constantly pushes the boundaries, with every stage she sets an additional hands-on learning experience for the next. This uniqueness in style as a result of her innovative, boundary-shattering mind has seen her collaborate with Adele, The Weeknd, Kanye West, and Beyonce among many others.

If you have a Chanel product in your bag or wardrobe, it can be traced back to the woman after which the brand is named, Gabrielle Bonheur “Coco” Chanel. She is credited with forever changing the way women are dressed, her ingenuity and hands-on style created a chic women’s style that has since then replaced the corseted silhouette that was the standard. Her influence in the fashion/design world saw her clinch a spot on TIME magazine’s list of the 100 most influential people of the 20th century, with her being the only fashion designer on the list.

7 Impressive Architectural Designs that Inspire Us in Philadelphia