Not too many activities that we take part in today have been around for thousands of years, but there is evidence that weaving, a craft involving the intertwining of yarn or thread to form fabric, existed in the Paleolithic era. Early humans weaved branches and twigs together to create shelters and baskets, but weaving as we know it was only able to develop with the production of string and thread. Finger weaving, lacing, and knotting were also early forms of weaving, and are still used today! 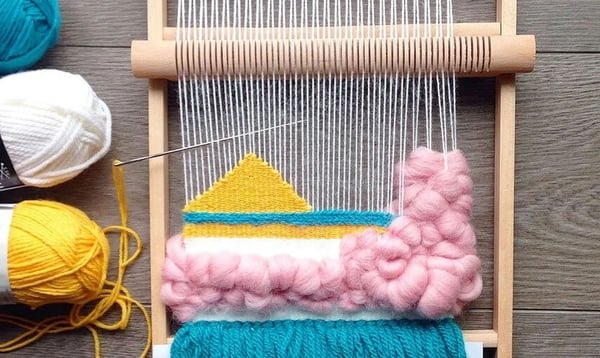 For a long time people mostly weaved with their hands, but when humans began to settle, looms came into play. A loom is a frame, typically made of wood, meant to improve the weaving process. Horizontal looms that lie flat on the ground were typically used in warmer climates where weavers would sit outside and work, and vertical looms were often used in colder, more temperamental climates and kept inside so the weaver could avoid the harsh weather. People also weaved different materials and fabrics depending on where they lived and what the weather was like and could create anything from linen to silk to cotton to wool.

Weaving was a craft mostly kept to the home until the Industrial Revolution in the 1700s, which meant that weavers (who were usually women) took their looms from their houses to factories. In 1733 John Kay invented the flying shuttle, a device that sped up the weaving process significantly and revolutionized the craft, allowing for faster, more efficient production. Then, in the early 1800s, Frenchman Joseph-Marie Jacquard invented the Jacquard Machine, a loom operated by a punch card that allowed for patterns to be created in the weaving automatically. Handweavers were so afraid that Jacquard’s invention would put them out of work that they burned many of his looms! (Sound familiar? Something very similar happened to Frenchman Barthélemy Thimonnier in 1830, not too many years later when he invented a sewing machine!) After the Industrial Revolution, 90% of weaving looms in North America were automated, and the craft was changed forever.

There are many different kinds of weaving, but all of them involve the intertwining of warp threads and weft threads. Warp threads are strung over the loom vertically and provide the backbone for the weaving, and the weft threads are woven in and around the warp threads to create the design.  In the most common type of weaving, a plain weave, the weft yarn goes alternately over and under the warp yarn and creates a flat surface on which it is easy to print patterns. Basket weaving creates a checkerboard pattern, and twill weaving create a strong, heavy fabric like denim.

There are many tools that go into weaving, like a tapestry beater to push down the weft threads, a tapestry needle to pull the weft threads through the warp threads, and shed stick to create a gap to easily pull the weft thread through, but you won’t necessarily need all of them at once. A fork is an excellent substitute for a tapestry beater, and you can even make a homemade loom out of cardboard! When you first start out teaching your kids to weave, it might be useful to string the loom yourself with the warp thread so that it’s all ready to go, and even have your kids practice weaving with paper first - the stakes will be lower, and it will help them get a sense of how the process goes. You can even invite some friends over and make it a party, and set up a “yarn buffet” to make it easier to distribute supplies without chaos. When a kid runs out of yarn, they can return to the buffet!

If you’re stuck without any ideas for designs or how to get started on a project, check out this fantastic weaving, complete with branches and pom poms! For some great tutorials on simple weaving projects, check out The Handwork Studio’s videos on straw weaving and hand weaving. And as always, if you want your kids to learn amazing handwork skills with incredible teachers and also make lifelong friends, check out The Handwork Studio’s camps and classes. We hope you enjoy weaving, and if you want us to see any of your cool new projects, post a picture on Instagram with the hashtag #SewMoreLove! Best of luck!