In this series we have been sharing stories about the people and places where The Handwork Studio team members find inspiration for their craft. In order to expand our community we will explore the different ways that people got their start in sewing, knitting, and other needlework crafts. This series explores the art that goes behind this craft and understanding the sources of inspiration for different people, and this week will be introducing you to Julia Yosen!

“For the Love of Teaching”

After graduating college with a fine arts degree, Julia Yosen found herself at a quarter life crisis asking herself, “What am I supposed to do with this?” This all too familiar end of college standstill is something that a lot of art students face, and leaves many with the question: well, what about teaching? 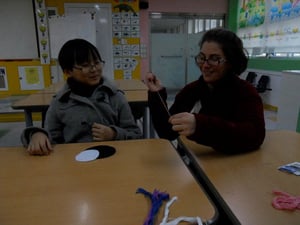 For Julia, teaching seemed to be the best option, but in that choice lies a path that she believed to be quite limiting. Julia moved from Vermont back to her hometown in Pennsylvania in 2006, and it was while she was working at a Joann Fabric, that The Handwork Studio fell into her view.

An almost serendipitous job opportunity was presented to her, and in that job, she could connect some of the many things that she feels connected to and is so passionate about. Melissa, a teacher at the Handwork Studio, connected with Julia while she was working at the cutting counter at the Joann Fabric. Melissa opened up an opportunity to get in on the ground floor of something that would “revolutionize needle arts.” With a dream to connect a new generation of kids to needle arts, Julia jumped at the prospect of being an instructor for one of the first workshops and programs The Handwork Studio ever held. That was when her start with The Handwork Studio began, but her connection to needle arts and crafting goes back a little earlier.

Julia first fell in love with crafting as she walked through the aisles of an A.C Moore. The arts & craft store’s endless creative possibilities excited the crafting gene in Julia. Two of her best friends and her would go down into her basement and move from one project to the next, which mimics the kind of collaboration and creative exploration that she would be facilitating at The Handwork Studio camps some years later.

Whether it was making clothes for their American Girl dolls by cutting up a box of their old clothes or making pig puppets they found in the back of the book, The Wonderful Pigs of Jillian Jigs, they were never short of crafts to tackle. “It was always the three of us in our basement, making all of these terrible projects. We would stay down there for hours,” said Julia, and it was here that she caught the bug for crafting.

As a kid who would always be starting her next project, Julia believes that there is something so empowering about creating something on your own. When you use your own hands to create something, there is a lot of pride that goes along with that. Julia did not discover her love for arts and crafts on her own but dedicates a lot of it to the things her mother and grandmother taught her when she was young.

Julia said her mother was always crafty, and her grandmother was a great painter who also taught her how to cross stitch. Although she says she was not that great at it, there is still something so powerful when having someone teach you a craft such as this. Although she originally thought teaching was something quite limiting, Julia has now come to understand the power of teaching needle arts to those who may not have had the same childhood she did.

“You want to be that inspirational person for these kids, and you want to create that environment where they are going to be excited about what they are doing,” says Julia while discussing her passion for working with The Handwork Studio. Even though it may not be where she thought she would be, having the ability to inspire a new generation of crafters fills Julia with an undeniable excitement. Julia believes that a lot of this creativity starts off “when we were little, and we are crafting and exploring,” and over the years, Julia has helped many little ones find their own creative gene within.