Machine Sewing: Learn Its Wild History and Why You Should Try It This Summer!

Machine Sewing: Learn Its Wild History and Why You Should Try It This Summer!

What enjoyable, kid-friendly summer activity has a history filled with theft, sabotage, and fortune? Your first thought might be that there aren’t any, but it might surprise you, as it surprised me, to find out that machine sewing fits all those categories! How is that possible, you might ask? Keep reading to find out more, and learn how to teach your kids to machine sew today.

As I mentioned, machine sewing has a long and rather complicated history that originated with hand sewing, something humans have been doing for thousands of years. Early humans used bones and horns for needles and animal sinews for threads. The first real sewing machine was patented in 1755 by a German gentleman named Charles Weisenthal. Weisenthal never actually designed the sewing machine, but he had the idea and acted upon it, so he’s pretty important.

After him came an Englishman named Thomas Saint who in 1790 created plans the first sewing machine. It was to be powered by a hand crank and used for leather and other materials. (Unfortunately, he never built it, but a man named William Newton Wilson made a replica in 1874 based on Saint’s plans, and it actually worked!)

The first truly successful sewing machine came in 1830 when a French tailor called Barthélemy Thimonnier invented a machine with a curved needle that used one thread. The French government patented Thimonnier’s invention and commissioned him to produce uniforms for the French army, but about 200 tailors burned his factory down (with him inside!) because they thought his machine would destroy their business. Luckily Thimonnier survived, but his machines were burnt to a crisp.

Ultimately a now famous man named Isaac Singer drew inspiration from the many machine designs and plans that came before him to create the Singer sewing machine. The Singer Company became an incredibly famous and well-loved brand, and Singer died with a personal fortune of $13 million to his name. At a time when the average American household income was $500, Singer managed to sell his machines for $125, and they were extremely popular. Although Singer reportedly didn’t care much about sewing, he did care about money, and he built his company into one of the world’s leading sewing machine suppliers for many years.

Even though the history of the sewing machine is intriguing, to say the least, you might still be wondering why you would need a sewing machine when hand sewing is seemingly less expensive and potentially less challenging to learn, but machine sewing definitely has its benefits. For example, machine sewing can save you money on clothes and other items once you learn how to make them yourself. You and your kids can also customize clothes, blankets, and other items and make them personal to you in a way that store-bought things won’t necessarily be. If you are a non-traditional size you can make clothes that fit you, and express your personal style through special items that you make for yourself! Learning how to machine sew can also save you a trip to the tailor if your child accidentally rips their clothes because then you can fix them right up at home. You and your child might even be able to start a business with your new machine sewing skills, like The Handwork Studio’s very own Anna Welsh, and sell clothes and items you make to friends, family, and others. Like knitting and crocheting, machine sewing also helps strengthen your mind and relieve stress, so in addition to being a fun activity for you and your kids, it is a beneficial one as well! 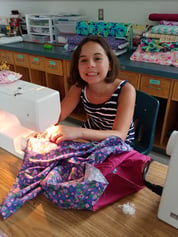 If you’re like me and aren’t sure exactly what parts make up a sewing machine, you can check out The Handwork Studio’s YouTube videos on getting to know your machine and its components. Here are a few of the basic parts of the sewing machine to get you started. Sewing machines also allow for crafters to use a variety of stitches! Most machines have settings for straight stitches and zigzag stitches, and higher level machines also have decorative stitches, blind stitches, and stretch stitches. Each stitch has a different use, and once again, it is always beneficial to do some research on which stitches are best for what you and your child are trying to create.

I hope this blog post inspired you and your kids to get informed, go out and buy a sewing machine, and learn how to use it today! If you still want some extra help or guidance, don’t hesitate to check out The Handwork Studio’s camps and classes, particularly the Fashion & Machine Sewing Camp for children ages 9-15, and our line of Simplicity Sewing Patterns. We can’t want to see what you and your kids dream up with your new sewing machine skills. If you want to share anything with us, post it on Instagram with the hashtag #SewMoreLove! Happy sewing!