Crocheting: How It Is Different from Knitting, and Why You Should Try It This Summer!

Crocheting: How It Is Different from Knitting, and Why You Should Try It This Summer!

So you’ve decided to try out handwork with your kids this summer, but you can’t choose between knitting and crocheting. What are the differences? Which is easier? Do they both offer the health benefits that we discovered knitting helps with in our last blog post? If you were never taught the difference between the two, it can be daunting to figure out how to start. You may have a family member that knits or crochets, but you’re not quite sure what goes into the different processes, and you’ve never thought to ask them why they prefer one form of the craft over the other. In this post we’ll explore the history of crocheting together, talk about the differences (and similarities!) between knitting and crocheting, and help you figure out which of the two you’d rather learn first! (If neither seem right for you, check out this blog post on kumihimo, a form of Japanese braiding, and an awesome summer activity for your kids.)

Crocheting, or the process of making “a piece of needlework by looping thread with a hooked needle,” has history in many countries around the world. A lot less is known about the origins of crocheting than knitting, but some researchers believe that the art originated in Arabia and traveled around the world via Arab trade routes, while others believe crocheting was born in South America or China. Even though the history of crocheting is not very well documented, its role in the world has been very important! After the Irish potato famine in the mid 1800s, for example, families survived on money they made from selling their crochet projects, and when millions of Irish people immigrated to America to escape the famine, they brought crocheting with them.

Early crochet projects were made using anything from hair to grass to animal fur as yarn, and animal bone, horns, old spoons, and wood served as substitutes for the crochet hooks used today. One of the main uses of crocheting in 16th century Europe, for example, was to imitate the fashionable lace that wealthier people could afford, but that people of the lower classes couldn’t. Nowadays people crochet afghans, blankets, scarves, hats, shawls, socks, tote bags, and more!

Now that I’ve told you all about crocheting and knitting, it’s time to learn about the similarities and differences between the two so you can pick which to try first! Both crocheting and knitting can be done by following patterns and you can make mostly the same projects using either technique. They require similar sets of skills - hand-eye coordination, patience, determination to see a project through to the end - and because of this, crocheting offers many of the same health benefits as knitting.

Crocheting and knitting, on the other hand, don’t use all of the same supplies. Instead of using two needles like you do when you hand knit, crocheting is done with a single hook. Although there are knitting machines that help mass produce clothes, no machine has yet been invented that properly mimics crochet stitches, so almost all crocheting is done by hand.

There is no simple answer to which process is easier: some people find crocheting more natural to pick up and others think knitting is less difficult. Because you can make very similar projects with knitting and crocheting, whether you wish to create a blanket or a hat shouldn’t stop you from exploring one or the other. If you want to help teach your child how to knit, check out our last blog post for some amazing resources on getting started! 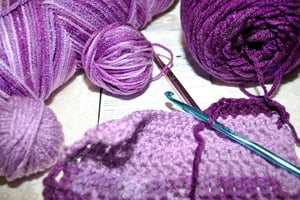 If you wish to try crocheting, you have many options for how to begin! You can send your kids to one of The Handwork Studio’s summer camps where they can learn all sorts of crafts, or you can check out The Handwork Studio’s YouTube tutorial on how to get started crocheting and learn right alongside your kids. No matter which technique you choose to learn and how you decide to explore it, The Handwork Studio will be right by your side with resources and guidance.

If you and your child work on projects that you want to share, post a picture on Instagram with the hashtag #SewMoreLove! We would love to see what you and your young crafters create this summer!