I left Narberth this past Friday to head to Ashford, CT. This tiny little town is located in the Northeast region of the state and is home to Hole in the Wall Gang Camp. 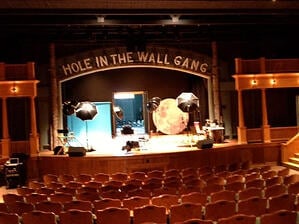 I was introduced to Hole in the Wall Gang Camp by Laura Kelly, the owner of The Handwork Studio after she watched a segment on CBS Sunday Morning Show documenting the camps 25th Anniversary.  Hole in the Wall Gang camp was founded by actor/philanthropist Paul Newman and has been thriving for the past 25 years.  During the first camp season in 1988 it took in 288 kids it now runs year round and sees 1,000's of children in their camp programs.

After Laura viewed this segment she announced that we are going to bring needle arts to Hole in the Wall Camp!  She showed us the powerful video that brought tears to our eyes. Not because it was sad but because it was happy.  This was a place for kids, who deal with the realities of serious illnesses such as, cancer, hemophilia, sickle cell anemia and other medical conditions, to just be kids while still being in a safe environment.

Since summer is now months away you would think going to camp would have to wait, but at Hole in the Wall Gang, camp does not end because the weather gets cold.  They run weekend camp getaways in the fall and spring for families, siblings, and campers to have reunions.  I participated in a camper weekend.

I packed The Handwork Mobile full of crafty goodness; fluff, and floss,  fabric, and thread, sewing machines, needles, buttons, and much, much, more.  Campers were going to make teddy bears with The Handwork Studio this weekend.  I was excited and nervous.  I was not really sure what to expect.

When I arrived I was warmly greeted by the counselors who help out year round at Hole in the Wall.  I sat around the indoor fireplace "campfire" with 50 campers coming from all over the Northeast region.  They told stories and we ate s'mores.  To the unknowing eye this place seemed like any other camp. They have enormous totem poles, cabins for campers to sleep in during the summer months, a pool, a lake for fishing and boating, a cool treehouse, and a spacious dining hall where you eat family style. When you take a closer look you can see that the pool is zero entry so wheelchairs have access and the temperature is always a warm 98 degrees so kids with Sickle Cell can swim too.  Cabins are equipped with air conditioning so campers can remain comfortable in the hot summer months, and my favorite part of camp was the treehouse, the largest wheelchair accessible treehouse in North America, where kids can hang out and play games, and look out over the lake.  It is beautiful.  Truly a place you can appreciate whether you are ill, healthy, young, or old. 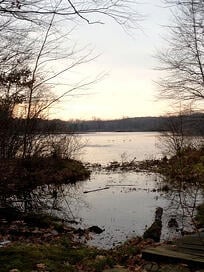 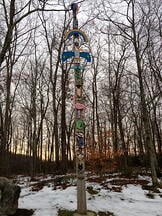 Saturday morning, camp was up bright and early.  We all gathered for breakfast in the dining hall; eggs, bacon, pancakes, and even VEGGIE SAUSAGE!!  I was thrilled!   I filled up quickly and then walked over to the Arts and Crafts Center that transports me to the old west in reference to Paul Newman's movie "Butch Cassidy and the Sundance Kid".  The Arts and Crafts Center is a place for kids to learn how to throw on the wheel, sand and saw in the woodshop, paint murals, and this weekend, SEW! 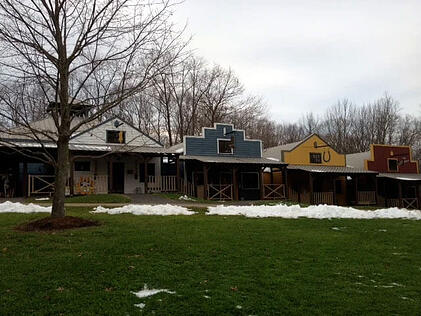 Many of the campers and counselors have never sewn and were excited to make their own teddy bears from scratch. They traced, snapped in eyes and noses, sewed on the machine, stuffed and decorated their bears.  By the time lunch rolled around the Arts and Crafts Center was buzzing with boys and girls sewing, stuffing and stitching some of the most creative teddy bears I have ever seen. 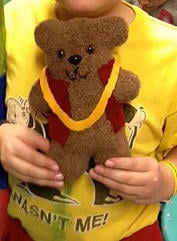 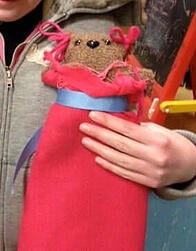 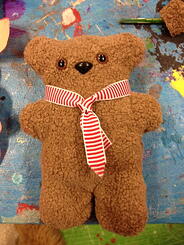 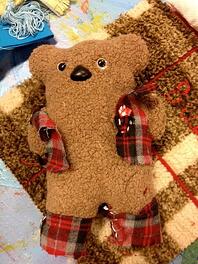 We headed to lunch and had another great meal but during this meal it was an interactive experience.  In true tradition of camp they sang songs, danced, and bantered back and forth between rival tables.  After being taught by some of the campers and counselors I was even able to bust a few dance moves and sing some songs.

As the day was quickly moving along by late afternoon we went back to our activities and continued our bear creating.  The kids came in and out until dinner time and left with their bears.  We had gangsta bear, pretty pink princess bear, Buttons the Bear, and the businessman bear to name just a few.

Our crafting time was over for the day but the evening was marked by a camp wide game the included costumes, Disney trivia and human size Hungry Hungry Hippos!  By 10pm it was lights out for campers and I fell into bed too.

Sunday morning we had one last crafting session before parents came to pick up their kids. Campers and counselors stopped in to add finishing touches to their bears or to make one for their siblings at home and to give me a quick hug.

In our short amount of time I felt I became apart of the family and was sad to see the weekend coming to an end.  Lunch time was our final chance to say our goodbyes.   I sat with campers and the conversation consisted mostly of making plans on how they can stay forever.  I would too. The past 36 hours have been nonstop fun. We all enjoyed dancing, playing, creating, and making new friends.  I feel fortunate to be apart of that experience and I am in awe of the love and compassion everyone shows for one another. I hope in some way I can incorporate a little Hole in the Wall Gang into my life and The Handwork Studio.