In this series we have been sharing stories about the people and places where The Handwork Studio team members find inspiration for their craft. In order to expand our community we will explore the different ways that people got their start in sewing, knitting, and other needlework crafts. This series explores the art that goes behind this craft and understanding the sources of inspiration for different people, and this week will be introducing you to Tim Pence!

There can be this assumption within handwork that one is taught these skills at a young age and has then stuck with that craft ever since. For some, however, needle arts can come later as a result of their passion for creativity and art. For regional camp manager Tim Pence, his connection to needle arts did not come until more recently. Before he found his passion for sewing in undergraduate school, he seemed to dip his toe into many different creative fields within the world of visual arts.

Tim’s creativity was discovered at a pretty young age as he and his brother became big fans of the He-Man cartoon and the Oz book series. “We took this to another level by creating elaborate storylines for our toys and improvising the outcomes,” and Tim said that ultimately, he loved being able to create a different world to play in. 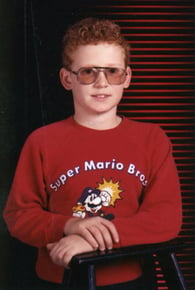 In his earliest memories, Tim fell in love with drawing and the kind of limitless places that it could take his imagination. He specifically really found a passion for drawing comics. When he was in third grade, Tim says that two of his friend in elementary and middle school would spend a lot of time creating comics. He and his friends “took this pretty seriously,” and in that time wrote and drew many different stories that seemed to spark a slightly embarrassed laugh from Tim even today.

Although Tim mentioned that these were maybe not the most groundbreaking pieces of work, he stated that it was a great way to get his ideas out when he was younger. This love of drawing and creating comics was just the beginning of Tim coming to understand not only what art means in a general sense, but what art means to him. 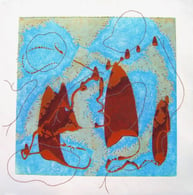 As mentioned, Tim says that when he was doing needle work in college that was the time he felt really connected to needle arts. Now, as a MFA candidate in Theatre Set Design at Temple University, Tim feels as though he is finally being able to draw all of his influences into his work in lots of new and interesting ways. His program has been a great way to apply what he has learned to incorporate all of the senses into his work, and he feels as though he is able to reach a larger audience. “I think I have done a lot of exploring with different materials, processes, and mediums. Theatre design sort of gives me a context and a way to process all of it. I have been building up a vocabulary and now I have been finding a place to use that vocabulary,” said Tim. 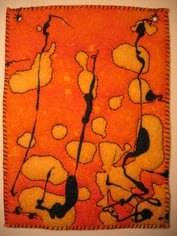 When asking what has inspired his work, he said that one thing that he really looked to for inspiration was the music of Kate Bush, which he discovered in his early twenties. Even though he has never worked with music himself, he thought that her use of metaphor and the way she talked about her music was something that helped him “discover what art was.” It is interesting to see how music could inspire his work with visual art. Tim said, “I’m most transported by music as an art form, though I’m not a musician. It’s my goal to transport others in the same way, but through an immersive visual experience.” Along with her music, Tim said he is also inspired by relationships, nature, and the different materials he encounters.

Making art has become a huge part of Tim’s life, and something that has ultimately brought him to The Handwork Studio. While working towards his degree, he has loved being able to teach kids to hone in on their own creativity and introduce them to handwork. Allowing kids to access their own creativity is something that Tim sees as being very important. “It’s not something they would be learning in school to this degree. So, to be teaching them so many different things and watching them do things for themselves is really rewarding.” While teaching kids today how to grow in their creativity, he is also always looking for ways to improve and grow within his own craft.

In this series we have been sharing stories about the people and places where The Handwork Studio team members find inspiration for their craft. In order to expand our community we will explore the different ways that people got their start in sewing, knitting, and other needlework crafts. This series explores the art that goes behind this craft and understanding the sources of inspiration for different people, and this week will be introducing you to Ana Castro! 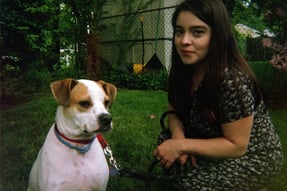 When asking studio administrator Ana Castro about the moment she caught the crafting bug, she paused for a moment, and attempted to trace herself back to that singular moment. After lingering over the thought, she responded, “Well, I never wanted to be anything other than an artist,” which truly speaks to the meaningful way in which Ana has viewed the journey of her craft throughout her entire life. Some people can pinpoint an exact moment when they were taught a certain craft, or maybe trace it back to a certain person, but for Ana, it seems that creativity has been at the forefront of her life from the very beginning.

Ana has always been surrounded by creativity, and a lot of her inspiration today comes from her Costa Rican background. The colors and textiles that come from that area really inspire a lot of her work, and she loves to infuse the styles of their traditional interior design into the pieces she creates. Along with her Costa Rican background, Ana also finds a lot of inspiration, especially when it comes to her color palate, from the style of the 90’s and the different toys she had when she was growing up. So, while one side of her pulls her towards the image of the traditional Central America home, another brings her towards her childhood in the states.

Growing up, Ana said she spent a lot of time by herself, therefore finding imaginative ways to express herself. “I’m an introvert, and you know a lot of people wouldn’t realize that when they meet me,” said Ana. A lot of her work is then inspired by the kinds of activities she did when she was younger, while discovering who she was. Most of her work is inspired by the body, and by movement and dance specifically. She says that a lot of her pieces mimic this sort of fluffy and plump feeling. Although never fully realizing it, Ana sees now how her childhood has found its way naturally into her work today.

Another part of who inspired Ana’s creativity growing up were her parents. Both of her parents are chefs, and she said that seeing them be creative helped foster creativity within herself. “They were so resourceful, and everything had to be made a certain way,” mentioned Ana, and it was the ways in which they always thought outside of the box which allowed her to think that her career as an artist could be what it is today.

Ana got her degree in crafts from University of the Arts in Philadelphia in 2014, where she fell in love with the entire creation process. During a critique for one of her earlier pieces, she realized that the work she creates has more meaning than just its materials. “I found that everything has a connotation whether you want it to or not. That was an inspiring moment and I chose to pursue that kind of craft after that point.” Then after University, Ana was drawn to the vision of The Handwork Studio, saying “I thought it was really lovely that they were expanding the audience [for needle arts] and that they were fostering a community.” 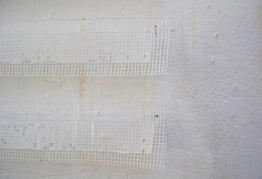 Now, Ana embraces the meditative practice of her craft and loves being able to pass on these fiber arts techniques to kids today. “The projects they make become a part of their life in a much different way than store bought toys. We give kids the autonomy to pick every single part of their piece out, and that way they will value it so much more highly,” she said. By giving kids the opportunity to make these crafts a part of their life, Ana believes that more and more kids will be able to find ways of expressing themselves in the creative ways she did growing up.