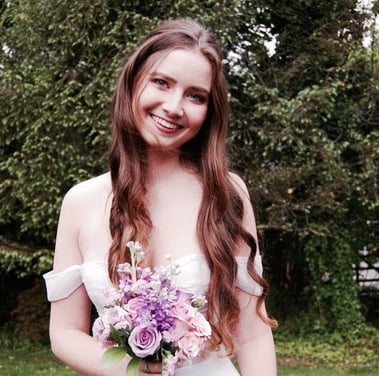 Who is Sharon Baranov?

Sharon explains  that in addition to engineering she paints, sews, and does fashion design. Her favorite type of art is probably making clothes, but the week before our interview she took a still life painting class (where she tried oil paints for the first time) and loved it.

When she grows up, Sharon most likely wants to do something in mechanical engineering, but she also wants to relate her engineering back to fashion, because she finds that “they’re kind of intermixed a little bit because they’re both about making things.” 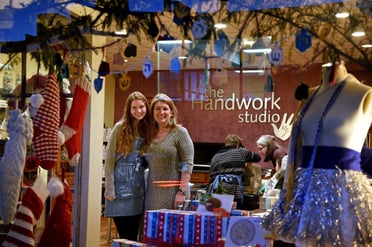 Sharon started sewing at a remarkably young age. Her mom bought her sewing kits from Joann Fabric that she really enjoyed and she attended a knitting class at another camp and had a great time, so her mom signed her up for classes at the Handwork Studio. She tells me that she was 5 or 6 years old when she started attending the Handwork Studio. To start that young, someone else in Sharon’s family must have been interested in handwork if she got involved that early, but she shakes her head. “No one else in my family really did sewing. My two older sisters had learned to knit so when I first started knitting one of my sisters (who is about ten years older than me) was starting to help me, but she didn’t know a lot. She couldn’t really cast on or anything, so then my mom sent me to the Handwork Studio.”

It’s telling of Sharon’s dedication and love for handwork that she stayed committed even when those around her found other things to do. Even after Sharon aged out of the Handwork Studio, she remained involved, working at the Narberth studio through summers and school years. 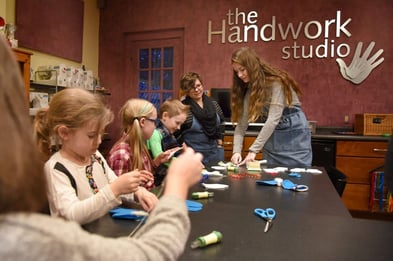 Its hard to imagine that the Handwork Studio has been anything less than formative for Sharon because of her lifelong relationship with it, and she agrees wholeheartedly. “It definitely had a lasting impact on me because it kind of got me going in sewing, and I had really great teachers, and they were really fun. Especially because I had a lot of friends that went with me and I made friends that kept me going. Taking sewing classes by yourself - which I also did with a private sewing teacher - can sometimes not be as motivating because you’re by yourself. With a bunch of friends you’re all picking your projects together, and it just makes the experience really fun. Eventually, as I got older...they still kept me on volunteering because I was too old for the classes. I never had a break when it was like “Oh I’m too old for the classes but too young to work.” They just kept me going with it.”

Sharon immediately launches into a story when asked if she has a favorite anecdote or experience that she wants to share. She talks about this “huge fat bunny that one of the teachers had knitted a while ago” that sat in the studio that all the kids loved to play with. “One summer,” she recalls, “I decided that I wanted to make it. So they just let me do my own thing, and every time I had the chance, I would work on knitting this bunny. They weren’t very strict that I had to do every project and they let me do my own thing. It was really exciting because I finished the bunny and it was a huge bunny.” She forms a circle with her arms, indicating how large the project was, and laughs. “It was really cute.”

Designing for Her Own Life

Instead, she is asked to talk about the most significant way handwork plays a role in her life, outside of working at the Handwork Studio of course. She tells me that the Handwork Studio taught her “about the fun you can have with sewing,” so now she focuses more on doing projects that make her happy. “I just finished making my prom dress in April, and I just do little fun projects. I don’t make it something that is difficult for me; I just do what I like. That’s what they taught me.” 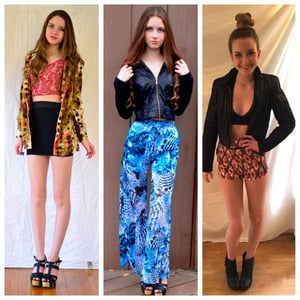 “It was really hard,” she admits, “because I decided to make the pattern for it myself, so that was really difficult, but once I got the pattern it kind of went a lot smoother and I was able to finish it.” She thinks for a moment before telling me about her 3-week internship for a tailor that she completed as her senior project, alongside making her prom dress. She worked at a store called SewRob near where she lives and got to see more of the business side of sewing.  Did she focus on administrative tasks? Fashion related work?

“I saw what he was doing with the tailoring and the pinning, but I didn’t work as much with the actual sewing of stuff because it’s still his business and he had to let his workers do their own thing,” she explains. “But I basically checked if everyone finished the work right. I would take a pair of pants and press the hem and make sure there weren’t any threads hanging off, and then I would check it off. I also watched him pin different dresses. A bride came in, and I was able to see that.”

Despite pursuing a career in something outside handwork, Sharon makes it clear that sewing will always be her hobby. She chose not to embark on a fashion career because she likes being able to make clothes for herself, and she likes the freedom of making patterns for things she wants. “That’s how I got into engineering,” she says. “I was thinking that I really like making things and fitting them together and seeing how they work.” She starts to tell the story of how she moved from fashion to engineering. 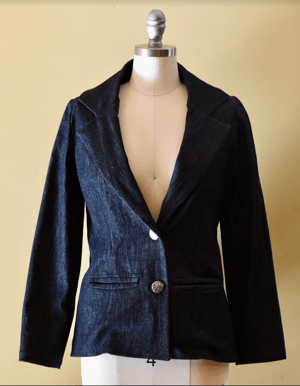 “I went to Parsons for a three-week summer program, and I did fashion illustration there which was a lot about putting the design and the colors together and stuff like that. And I liked it and thought it was really fun but it wasn’t really what I was going for. I was thinking a lot more about the patterns and how you can construct different clothes, and that’s really what I like to do. I don’t do as much fashion illustration at home; I just like to put things together and make the actual clothing. I know there are jobs like that in the fashion world but right after Parsons I had physics in school (my junior year) so we started doing projects like building a catapult or a bridge. I saw that I liked those two and how making those things connected to making the patterns in my sewing. I was thinking that if I get a degree in mechanical engineering and learn a lot about how things go together and how you make things then if I don’t like doing anything other than doing that with clothing then I can always go back and use what I’ve learned from my degree in mechanical engineering and apply it to clothing.”

Making It for Herself 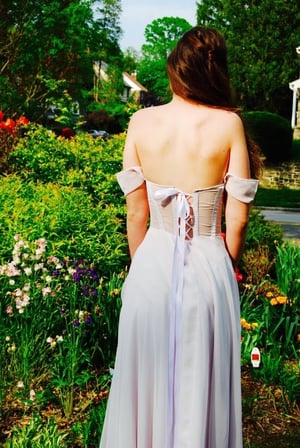 Sharon explains what she’s done over the last few years that she’s the proudest of, she says her prom dress. She goes into detail about the process and design.

“Basically it’s this corset pattern, and it’s not like anything I’ve made a pattern for before so at the beginning I was really struggling. I did pattern draping on a mannequin, and it took me six tries and so many months to do it and finally I just was like ‘This is close enough’ and started cutting out fabric and making it into the dress. And as it came together it felt really good because I got so many compliments from people who were like ‘Oh my god, how’d you do this’ and it felt really good to see a final product. And that's really what I like about sewing. You get through the whole process which can be really challenging sometimes, but then you get a product in the end that you’re really proud of.”

“You’re really close to your clothes. A lot of people express themselves through their clothing or just like nice clothing, so I feel like when you can make it for yourself, it’s just really nice. And it feels really close, even more sometimes than a painting.” 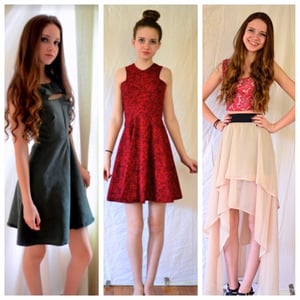 What is something Sharon wishes she could change about the last few years? She pauses for a second, then tells that she wishes that she’d kept sewing more after she decided not to pursue fashion as a career. Before she attended the Parsons program, Sharon had sewing teacher that had her make something new every week, and even though it was challenging, she wishes she had kept up with that schedule. Sharon essentially took a six-month break from sewing and only really got back into it to make a dress for her winter formal, her junior year. “It was a little bit of a sore topic, but I wish I had kept going because there are so many things I could have made during that time…then I did my junior formal dress, and it was like, okay, I really miss this.” She’s coming into the realization that she needs to find a way to keep sewing in her life (which is why she took this summer off from work - to make art). It’s always a balance to keep space and time for your art alongside everything else school throws at you.

Handwork as a Home

“It was a really good experience and made sure that I’ll always have something that I like to do and that I’ll always make time for. It helped me approach the arts. My mom is very into sports and stuff, and she’s never done any art, and my older sister was into painting, but I’m the first one to get into sewing. So it really helped me find ‘my thing.’”

See How it Works!

The Handwork Studio has classes and camps that can teach kids great lessons and shape their futures. Come join the fun and see what your child can make!