Who is Julia Haines?

When asked what her favorite type of art is, she immediately tells me that fiber art is her passion. She uses fabric and other craft-based mediums to create 2D and 3D works, and she particularly loves silkscreen printing on fabric and embroidery. To Julia, handwork is a very directional and soothing process.

Julia is asked what she wants to be when she grows up, Julia responds enthusiastically with “A lot of things! But I graduate next year, and when I graduate, I want to teach art, either in Philly or one of the surrounding districts.” She wants to teach at a public school, preferably K-12, and credits working with elementary aged students at the Handwork Studio for helping her become more open to teaching younger children.

Early Involvement with The Handwork Studio

Julia’s formal introduction to handwork is synonymous with her introduction to the Handwork Studio because she became involved with both in elementary school when her mom won a week’s worth of classes for her in a raffle at the Alex’s Lemonade Stand annual fundraiser. Before attending the Handwork Studio’s classes, Julia tried - unfortunately unsuccessfully - to teach herself to knit and was interested in sewing and embroidery, so she loved learning these skills in a more structured setting at the Handwork Studio. After being a part of the Handwork Studio family for several years, Julia took a brief break, then came back as a CIT for some time during high school. Then, she tells me, “I went to Tyler and I kind of returned to my roots, I think because, for me, my foundation in art is definitely through sewing and handcraft and not necessarily in drawing and painting. So once I became more confident in my abilities as an artist at Temple, I started really diving into fiber practices again.” Julia currently works as a counselor at the Narberth studio and ended up applying for the position after bumping into owner and founder Laura Kelly this spring.

Finding Her Place at The Studio

Julia reflects on the experiences she had at the Handwork Studio as a child and how they impacted her, and she makes it clear that they “were definitely formative. I learned how to do these skills that pretty much transferred to my university education, which is kind of cool, I think. To learn something when you’re like ten years old, eleven years old, and that actually comes into your college experience.”

Another part of Julia's experience at the Handwork Studio that impacted her was the atmosphere. “I remember feeling so comfortable and safe when I was there and that contentment that I felt while I was there was a good gauge in every other situation I found myself in growing up. Whether that was like formal activities or with friends. I kind of knew what this really nice, gentle comfort was.”

From Camp to Education

There are plenty of kids at the Handwork Studio who want to pursue paths like Julia’s and go to art school or continue to involve handwork in their careers in some way, so I ask her about her work experience and what led her to decide to attend the Tyler School of Art. It turns out Julia has been involved in a lot over the past few years and loves to keep herself busy, and the diversity of her work experience only reflects the sentiment that she wants to be a lot of things when she “grows up.”

The summer after her freshman year at Tyler Julia worked as an education intern at The Barnes Foundation in Philadelphia, where she researched their Navajo textile collection and compiled an information booklet for docents who lead student tours. She also worked for the same foundation the summer after her sophomore year of art school, but this time she went into their classrooms and evaluated how well the artists were teaching kids about the Barnes artwork and helped expand the children's’ critical thinking and analysis skills. This same summer Julia worked for Anthropologie as a display intern. In between all this Julia has worked on the sets of several movies doing costumes, photography, and production work, and in addition to working at the Handwork Studio this past summer, she was the blogger and insight editor for one of her professors, who sells tufting guns. Handwork, she says, has basically played a roll in all the jobs she has had so far.

Julia says that her decision to go to the Tyler School of Art a very last minute decision. She explains  that she took advanced art in high school but never considered art school because she thought it meant mostly drawing and painting realism and she wasn’t as good at that as she wanted to be. When she was a senior Julia was accepted to Temple University as a biology major, but January of that year she decided impulsively to apply to Tyler and scrambled her portfolio together in a month. “It was the smartest and the dumbest thing I’ve ever done.” 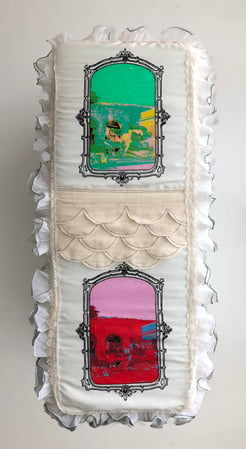 Once she got to Tyler, Julia never took any class or experience for granted because she just got in “by the skin of my teeth - the day before the deadline-” so she was open to any and all critique about her work. When I ask her what her typical day looks like, Julia tells me that her class schedule is pretty low maintenance - three studio classes a semester, each two and a half hours long and twice a week, and then two or three other classes that occur one to three times a week. This past year Julia went to the studio every day after classes, especially when she was busy preparing for her thesis show between November and January, and she easily spent 40 hours there each week. She admits that spending so much time in the studio can sometimes be rough, but that having friends both in the studio to keep her company and friends outside of the art school to keep her grounded and supports her makes it better. “If you love it, it’s fine,” she tells me. “It’s the only time that your only obligation is just to make art and if you don’t take advantage of it, you’re not being smart. At the end of the day, it’s fun.”

Julia is asked  to describe her art, and from where she draws inspiration. Does she have a theme that most of her art revolves around? Has that developed with college? “I’ve reached the most mature phase of my art where there’s this theme I’m really engaged with,” she says, “And mediums I’m very committed to so I’m able to compound my work one on top of another.” 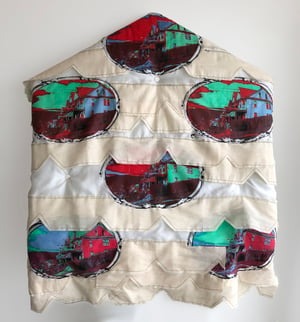 “I’m inspired by the impact that genetics play in our lives, both biologically, geographically, and politically. I draw a lot of inspiration from my mom’s side of the family who immigrated to the US at the turn of the century to a coal town and exploring how each generation changes but how these initial industrial towns that were hubs of immigration have gone into a decline and that is often politicized by all sides of the political spectrum. I’m sort of evaluating the romanticization of these industrial towns and how they impact the future generations. And the mediums that I work in to explore this theme are screen prints that I print on fabric, and these prints are derived from photographs that I’ve taken specifically of the town that my great-grandparents and my grandparents grew up in, specifically their blocks and their houses. And I’m especially fascinated with these very small but beautiful details in architecture such as shingles or molding that I then try to extrapolate on a much larger scale either through installation or soft sculpture. And I play with either very muted or very vivid colors depending on what emotion I’m trying to evoke with the piece.”

It is impressive that she can speak so openly and eloquently about her art considering it’s difficult to analyze your own work, and she explains that it definitely took her a long time to focus on that theme. When you first go to art school, she says, people are “making art about just anything” and she got caught up in that wave, because “it’s hard to be introspective and not oversimplify yourself.” Over the years she’s focused more on making art for herself and not for others, and, in her words, “a lot has changed politically since I entered freshman year in 2014,” she is now more interested in “why politicians target these towns and what they had to gain from them.”

Accomplishments as an Artist

She is asked what she’s done that she’s the proudest of in the last few years, and she says her thesis show without hesitation. Many complications went into the show, and she spent a wild two months putting it together, but in the end, it was worth all the stress. She tells that she took a lot of things that were painful to her and translated them to a large-scale installation - larger scale than she had ever done before - and it turned out great. After her thesis show, Julia had to prepare for another show in April, and she said that through all this stress she learned how to trust her decisions more. 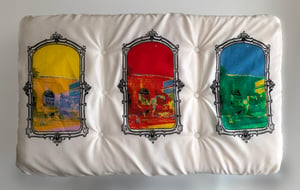 When Julia is asked what she wishes she could change about the last few years, she answers me easily, and confidently. “I could be hard on myself and I could say ‘I wish you were more honest with your art practice and you weren’t trying to make art for other people and you were just focusing on yourself first and other people second.’ Because I feel like at the beginning I was very focused on what my critique would be like and what people would think of it, not necessarily what I even thought of it. I was just picking stuff that I thought looked good or was pretty. So if I could, I would go back and change that, but I feel like that’s just something that happens with time and there's no point in being sad about that. I would have been more selective about some of the people I chose to spend my time with. I think your gut instincts are usually correct about people, and I should have relied on those instincts more. Academics wise I wouldn’t really change anything. I think things happened the way they were supposed to.” 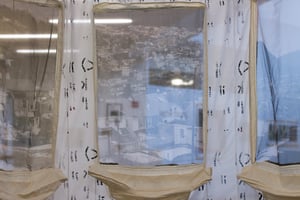 Julia is asked if she has anything else to say about the Handwork Studio? She thinks for a good moment before telling me that being back at the Handwork Studio and in that community of educators has been wonderful and that it is great to see people’s passion and how much they support each other.

“[The Handwork Studio] definitely changed a lot of things about my life, and I know it will change things about other people’s lives too.”

The Handwork Studio Camps are a great way for kids to gain exposure to a variety of handwork skills. Discover what your child can create with a caring instructor. Programs include: